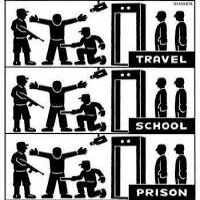 A new laser weapon that can blind suspects (or anyone else) is being promoted for police use. There has been excessive violence in the last few years with guns and tasers, but laser rays to take out eyesight? If anyone has questioned where we’re heading under federal program 1033 to arm local police departments with military weapons and to provide military training, this should clear up their confusion. In effect, the Department of Homeland Security is running America’s police departments now, not local officials. A “highly trained occupation force” is taking over, and a recent Federal Appeals Court ruling addressed the claim that this is exactly what the police have become, and that such conduct is prohibited by the Third Amendment, which protects citizens against being forced to quarter troops in one’s home. The judge found no violation even in egregious circumstances. This is something everyone should know about.